So Hip It Heals

I’m goofy. I’m a free spirit. A bohemian. Usually I don’t give a damn about what other people think about me. But sometimes I’m an idiot and I care. I like to think that I skip to the beat of my own drum, I do not mean to offend anyone. Having said that, I’m very opinionated. This is where it becomes a bit of a tightrope. On the other hand, I’m very insightful and sensitive. A complex human being. So while I was torturing myself (and asking for forgiveness), I was naturally drawn to working with certain rocks. But I didn’t know it yet.

I picked up a couple of “matched” cacoxenite rectangular cabs, (Cacoxenite: spiritual awakening, alignment and self awareness. Brings wisdom, ideas and creativity) and proceeded to crack one and completely break the other. Sacrebleu.

Cacoxenite is a rare (code for expensive) beautiful quartz, usually amethyst, with gorgeous inclusions that flash yellow/orange. It is used for world meditation to increase spiritual awareness. Obviously the (um, MY) spirit was in need of some more work. Just because you think you know the lesson, and can regurgitate the words, until you internalize and come to an understanding, you are going to continue to break stuff. Like rocks and relationships. Personal growth is such a pain in the you know what. 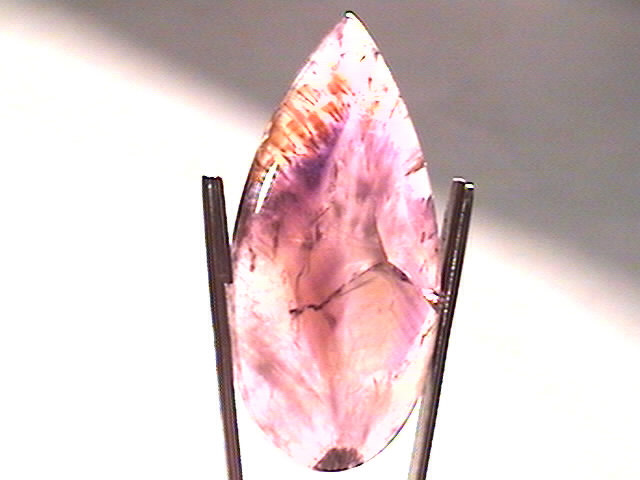 Did you think I knew what cacoxenite was for when I bought the rocks? Of course not. After I broke the cabs, I did a little research initially to find out about cleavage (no, not THAT kind) and instead found it’s healing properties. Now I know that this borders on the new age hocus pocus magical (wishful?) thinking and irrational. Maybe so. But it was the kick in the head that I needed. I went off and did some serious work on my “inner” self.

Then: I took out the only two other pieces that I had, took a deep breath and set them and they didn’t break. Read what you will into that. I added a couple of amethyst drops. (Amethyst: spiritual contentment, protection, peace). 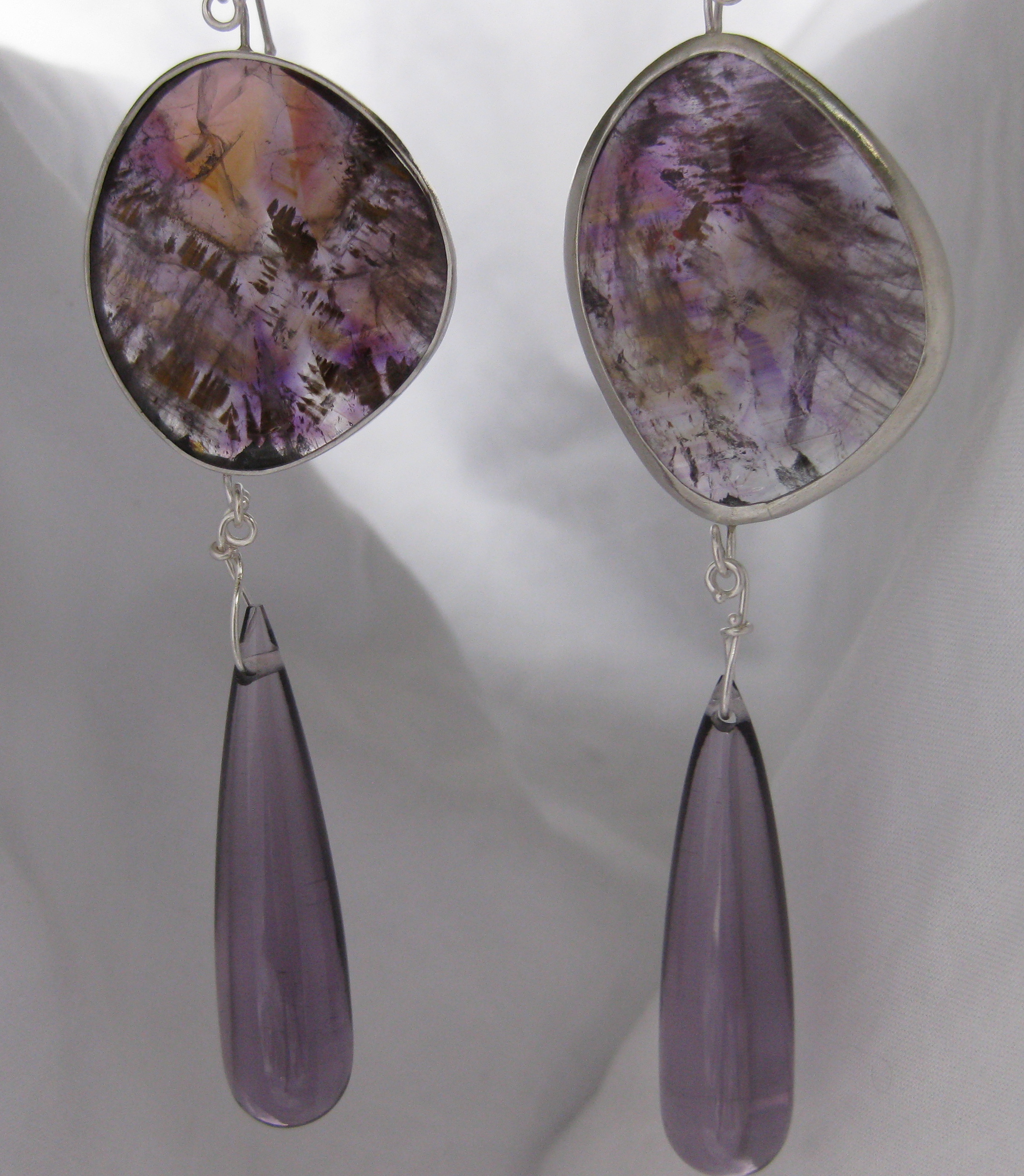 Did you know that the word “amethyst” literally means “not drunk”? Traditionally it was used as an antidote against drunkenness, which is why wine goblets were often carved from it. (Drink all you want from them and you won’t get drunk!) Now it’s used for help with addictions(!). Leonardo daVinci wrote that amethyst “dissipates evil thoughts and quickens the intelligence”. Coming from one of the greatest minds ever, I’m OK with being accused of being hippy dippy about this.

Since I was already doing research, I thought I’d check out a few other “hunches” that I had. I make a less expensive line of pearl earrings. Recently I thought I should figure out how to promote them for the bridal market (“Bridal” was a very big theme in Tucson this year. They even had seminars on how to deal with couples etc). I can do them in a variety of colors, and they’d be great for bridesmaids. Here’s a couple of earrings that I can make limited batches of, and here’s what they MEAN!! 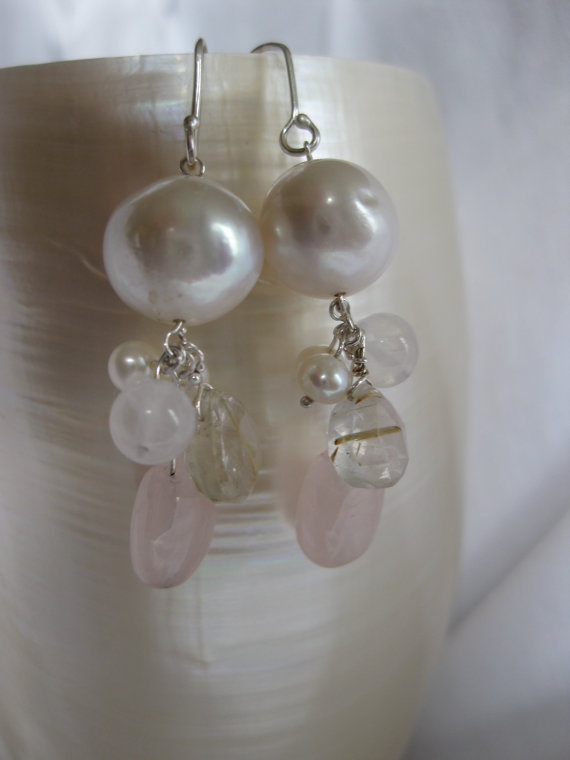 Pearls with rose quartz and rutile quartz: The pearl is the symbol of purity and innocence. Rose quartz is all about LOVE!!! Rutile quartz (AKA Cupid’s darts, Venus Hair Stone or Crystal and Fleches d’amour, which translates to “arrows of love”) attracts love and stabilizes relationships. 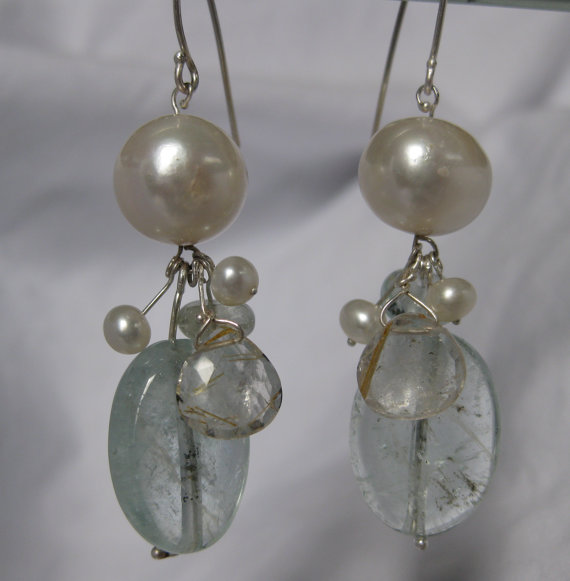 Pearls with aquamarines and rutile quartz:  We already know what the pearls and the rutile mean…
Aquamarines are a symbol of peace and promises a happy marriage (and not only that but will bring the woman wealth and joy!)
I am sooo insightful and sensitive.