When I tell people what I do, I often wonder what goes through their mind. “Oh, you make jewelry!” they say,  “I love jewelry!” I don’t get excited anymore. Most people think of traditional diamond and colored gemstone pieces that are sold in department stores. Not that there’s anything wrong with that (insert Seinfeld credit here). I have come to terms with the fact that not everyone will like what I make, or “get” it. First, I don’t make anything that you would find in, say, Zales. I like rocks, but, I like them bigger and with scars: fractures, inclusions, imperfections. Stuff that shows personality. I have my personal “rock” favorites, and they usually don’t look anything like the “rock” that most would visualize. Take garnets for example. In particular green garnets. (FYI: garnets come in practically every color, except maybe blue, and there are a wide variety of garnets, including green garnets). When you mention “Green Garnets” to someone I think this is what goes through their mind:

When I think of “Green Garnets”, I make this: 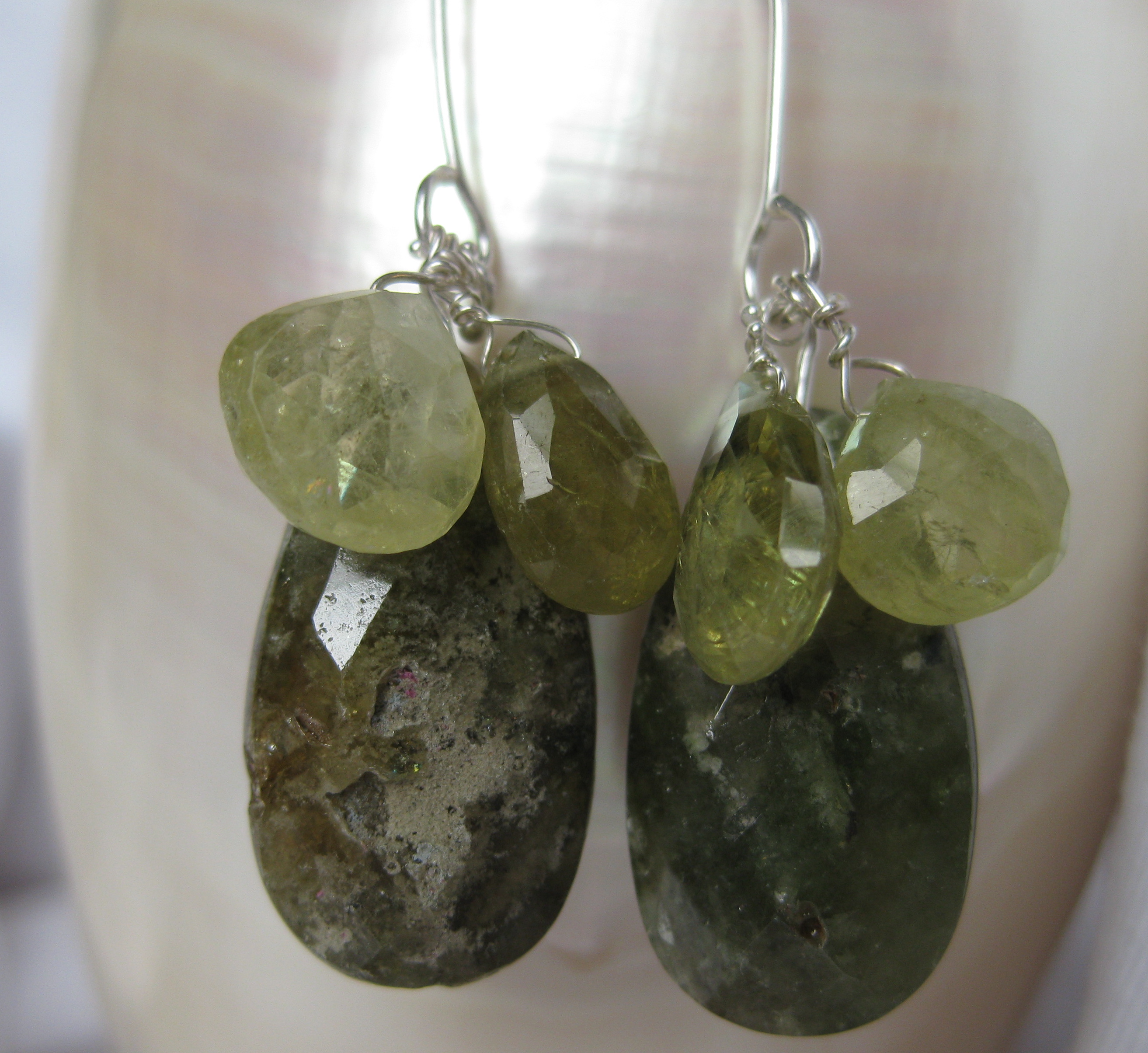 If you go to Zales, they’ll show you these: 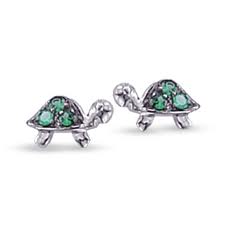 I like opaque “damaged” looking rocks, semi transparent rocks, and the ones full of inclusions. That’s just me.

Last spring, I had to go to New Jersey to attend a funeral. We were a 45 minute train ride outside of New York City. I had bought some really cool “rutile amethyst” from a NY gem dealer when I was in Tucson last year, and decided to look him up while I was in the area and see if he had any more. You’d think this would be easy right? Well, it turns out this man’s gem business is his “side” business. “That’s OK” I say,” bring some stuff and meet me on your lunch hour”. To make a long story short, that wasn’t going to work for him, so: I meet him at Grand Central Station and we take a bus for over an hour to his house (also in New Jersey, but on the OTHER side of NYC). It was an interesting experience. Most gem dealers are from other cultures and this adds to the exotic side of the business, which I personally love. 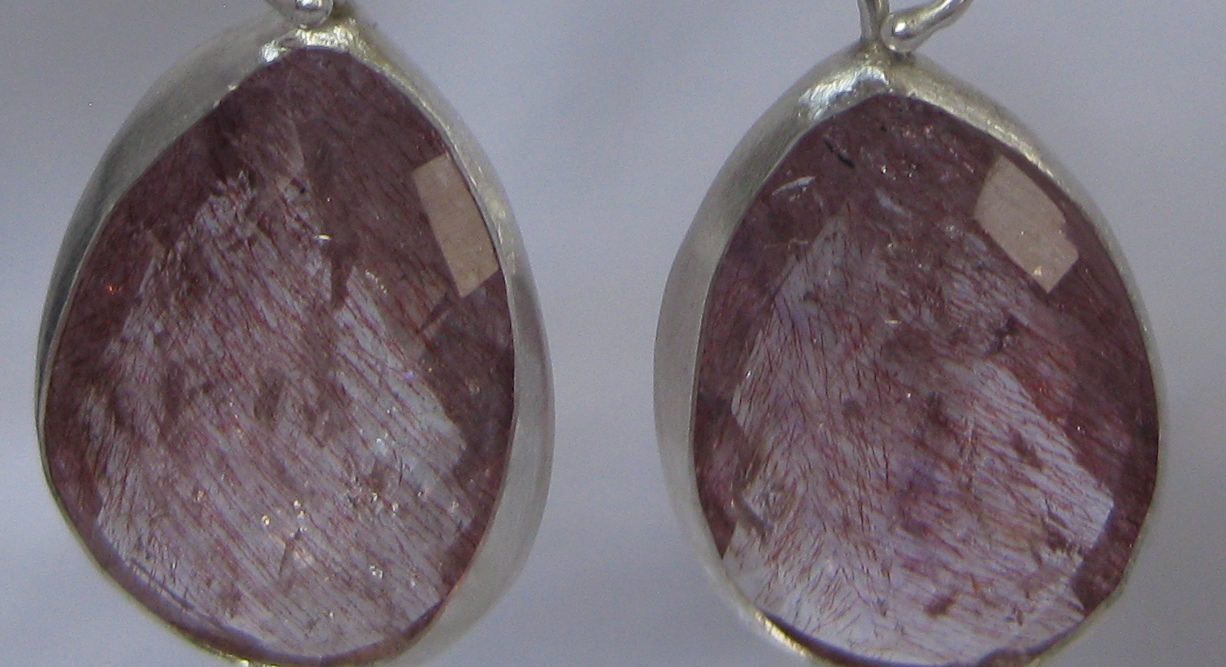 We arrive at his house, in a nice suburban area. The house is spotless and minimally furnished. We are greeted by his in-laws (who speak no English). They are watching a “Bollywood” movie on a big screen TV. I wait while they get their inventory together. I am invited upstairs, where, in the daughter’s bedroom, a white sheet has been placed over the bed, and I sit down (lotus style) on her bed, and am presented with plastic shoe box after plastic shoe box filled with gemstones. Most of which should just be bought by Zales. “Where is the rutile amethyst?” I ask. They can’t get anymore, it’s rare, hard to find. “Well what about some flawed Apatite? Or Iolite?” (Now I’m essentially wailing). Flawed? This is taking them by surprise. Why would I want flawed gemstones? Because the other stuff looks like plastic to me. Because I love this: 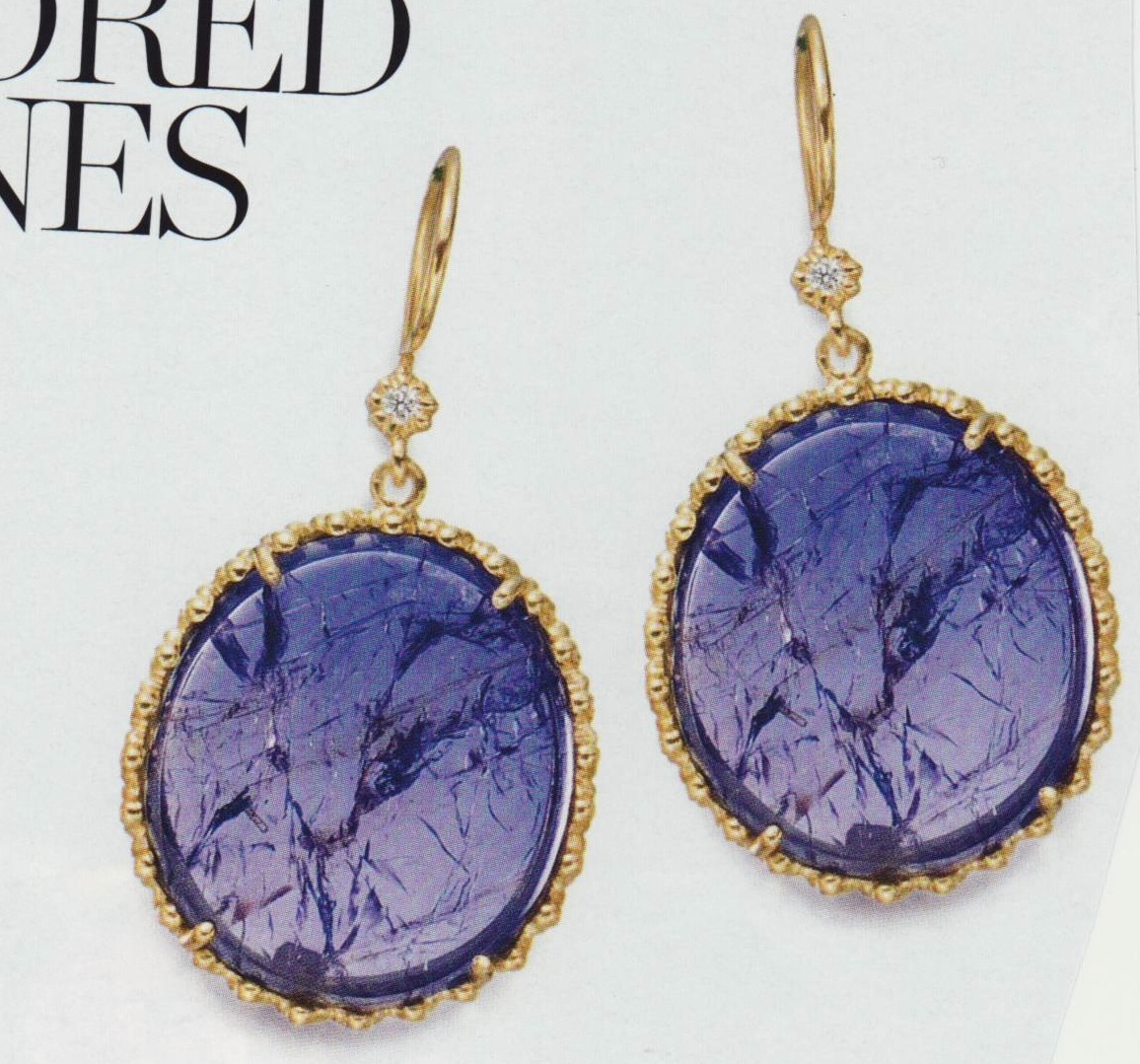 Iolite Earrings (made by somebody else!)

They think I’m crazy. I buy a few things (not much) for extra ornamentation with the really cool rocks that I am hoarding, or looking to find. And then: a two hour trip back to the other side of NYC.

Now to be fair, rutile quartz and amethyst are not considered to be flawed gemstones. They just have the look I’m going for. Technically the rutile is considered an “inclusion” which is a term used to describe flaws.

Here’s what I made with the three pieces I was able to score when I met my man in Tucson: 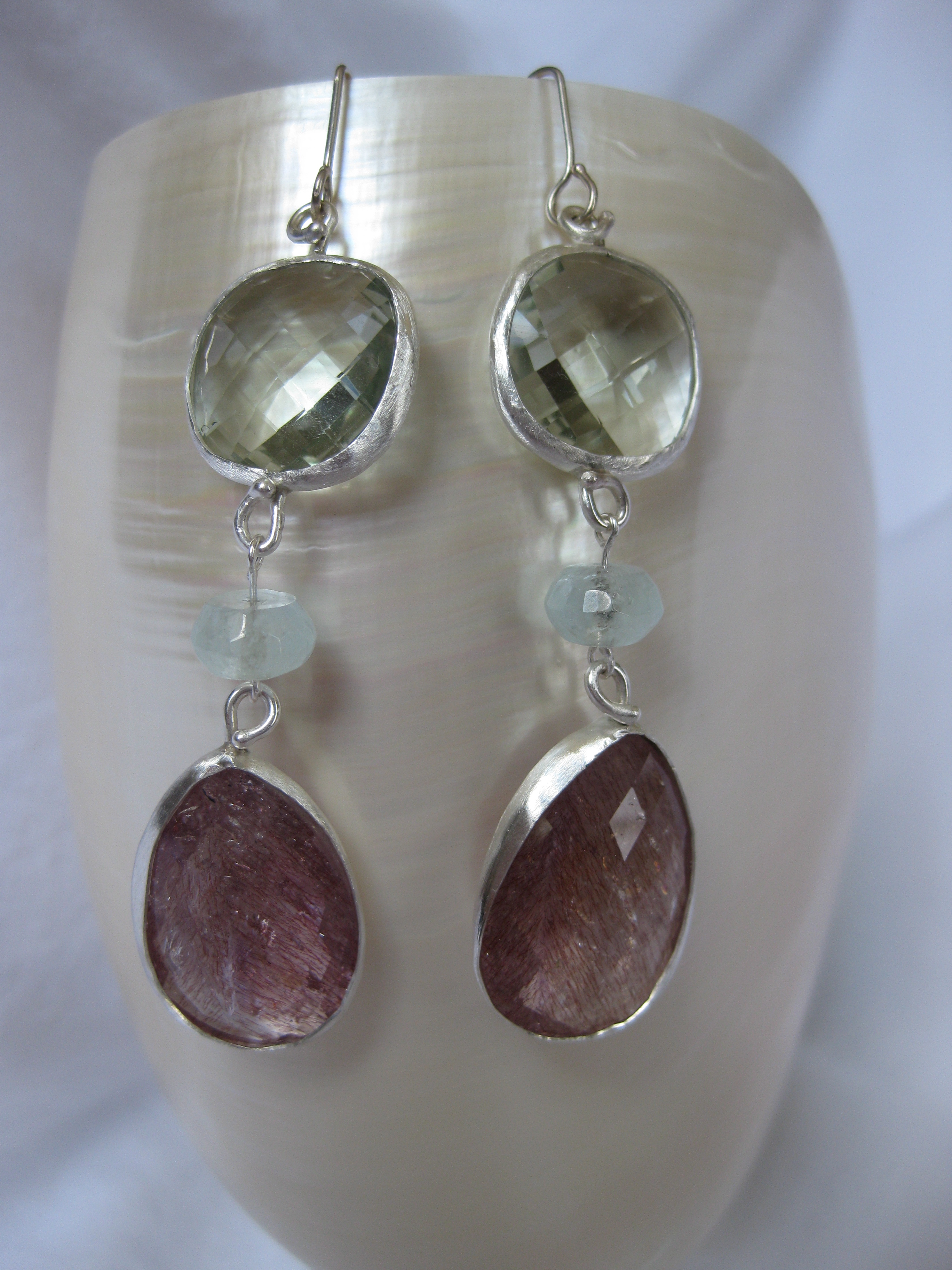 These earrings are available at my etsy shop. Fair warning: They are NOT for the faint of heart!! They hang a good 3+ inches and are more in the “investment piece”  $ category. (http://www.etsy.com/listing/80035000/rare-rutile-amethyst-green-amethyst-and) 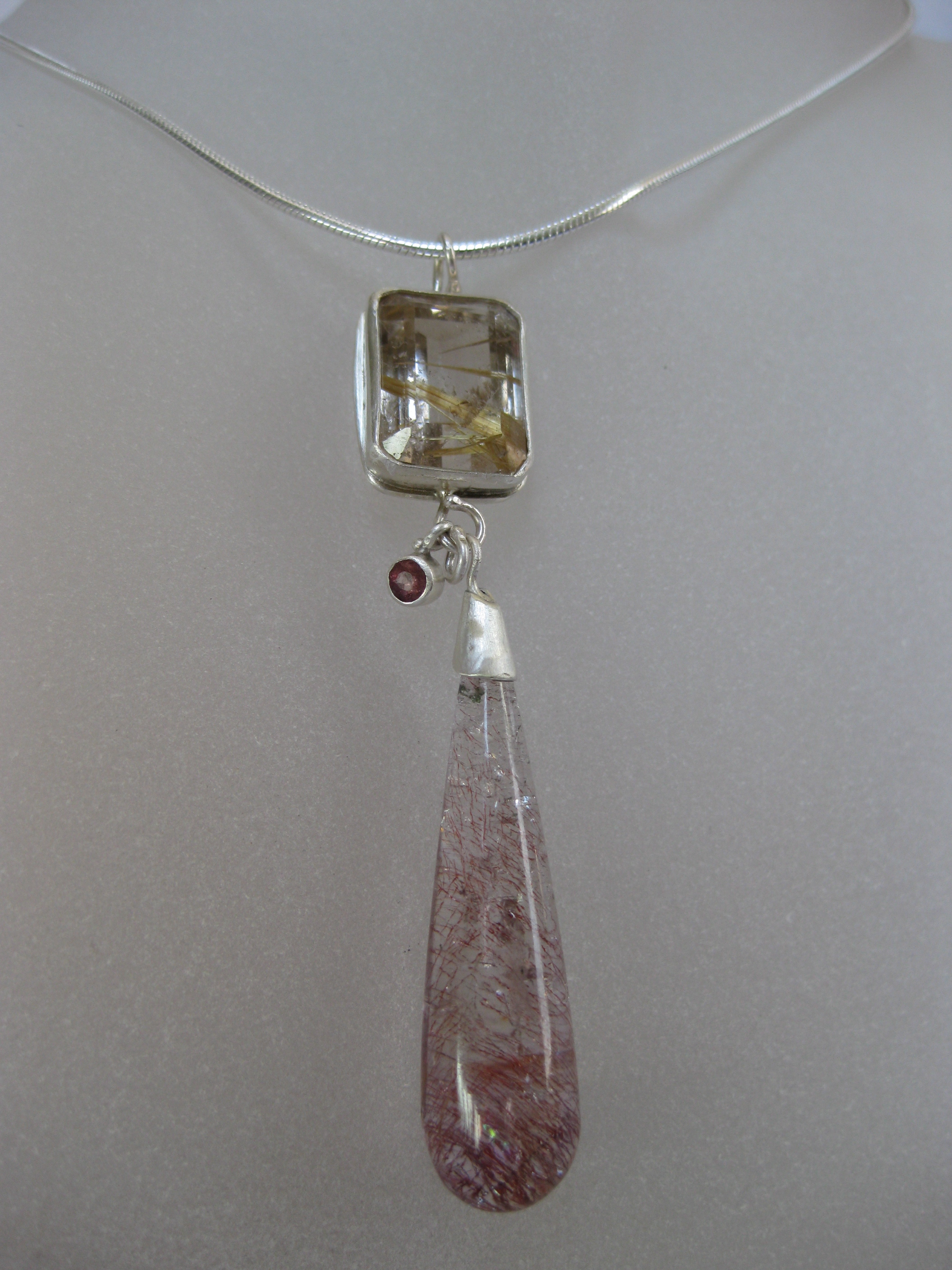 This piece (above) is now owned by one of my favorite people, courtesy of her husband. They know I’m wacky, and I love them because they don’t care.