Mess And A Half

Did you read my last post? Sunstones & self confidence? Warning: I am about to thump my chest like a big hairy beast.

Every now and then I make something that even I think is a little too wacky. It didn’t help when the New Orleans Arts Council dismissed my work as “messy” a couple of months ago, and rejected my application to show at the art shows they hold in the park. So sometimes I get insecure. I really need to get over it. I’ve been working on my resurrected jewelry career for just over a year now. I have followers in New York, L.A. and even one in Paris, not to mention my hometown of Montreal and in Toronto. All sophisticated places with styling chicks. The rejection reminded me of 1984 (I hate dating myself like this) when the SNAG (Society of North American Goldsmiths) conference was held in Toronto. I was living and working as a really really young jewelry designer in Toronto at the time. My work was shown in galleries across Canada, but not in Toronto. I did have my pieces in some posh shops for fashionistas, and hot, cutting edge hairdressers often used my earrings in their ads. However, the Metal Arts Guild of Ontario, the self proclaimed deciders of the craft, routinely rejected my work for all the “important” shows.

Well, in 1984 I got pissed. So did a number of other really talented jewelry and metal artists. It was time to make lemonade from these lemons.

There was a new gallery in town called NeoFaber which eventually became a well known glass art gallery (it closed a couple of years ago) but at the time they showed all mediums. I approached them and they agreed to give me and the other rejects a “Salon des Refuses” venue.  I even got a Canada Council grant for the expenses, and named it “Crowd In A Silver Lining”. To make a long story short, our little show got the most publicity, and this was way before the internet or twitter. We were written up in the daily paper, the weekly arts & entertainment paper, and the local TV station did a segment on the news! Opening night was a raging success and I felt vindicated. I did get a huffy call from a member of the guild wondering why THEY weren’t “consulted”. Some people have a lot of nerve, but I never got a rejection from any Metal Arts Guild shows after that.

My one Parisian “follower” is tres chic. She collects and sells antiques and all kinds of finely crafted pieces. Her bio includes 10 years of buying luxury goods for the American Embassy in Paris. She has a house in New Orleans filled with amazing chandeliers (hand blown in Italy, where else?) and stunning furniture. Last month, she arrived for her annual visit. She’s been an enthusiastic supporter of mine from the beginning, offering suggestions for enhancing my work and business whenever she feels I need a little direction. I always look forward to seeing her.

Usually I just show her my finished pieces, but after a couple of glasses of Champagne (courtesy of my Parisian friend) I bravely brought out some of the Wanga pieces I’d been working on. “This might be too wacky ” I say, “It’s not finished, but I’m going to add a green leather cord like this, and make some end tabs that look like this…”. My collector friend ordered two. 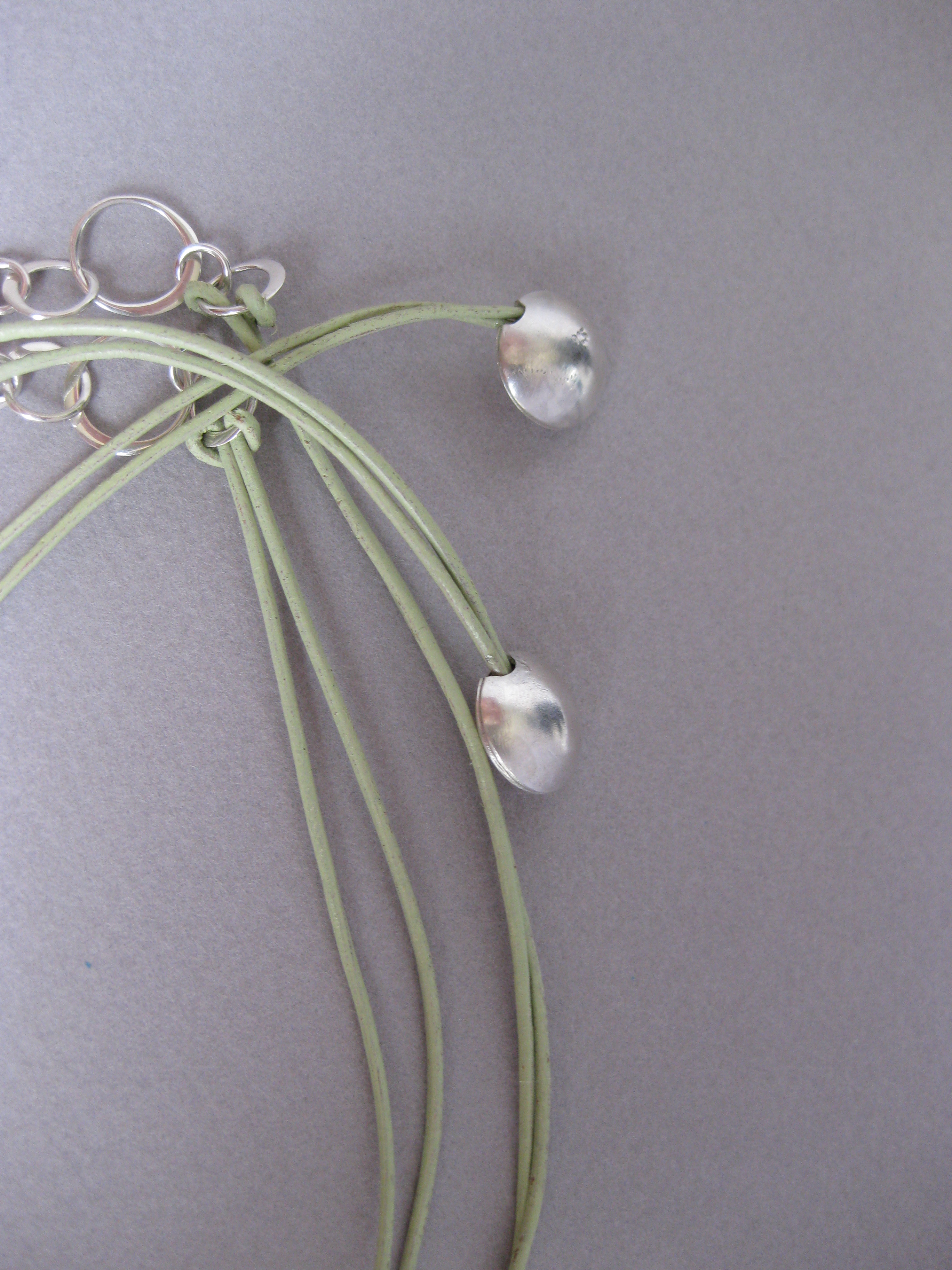 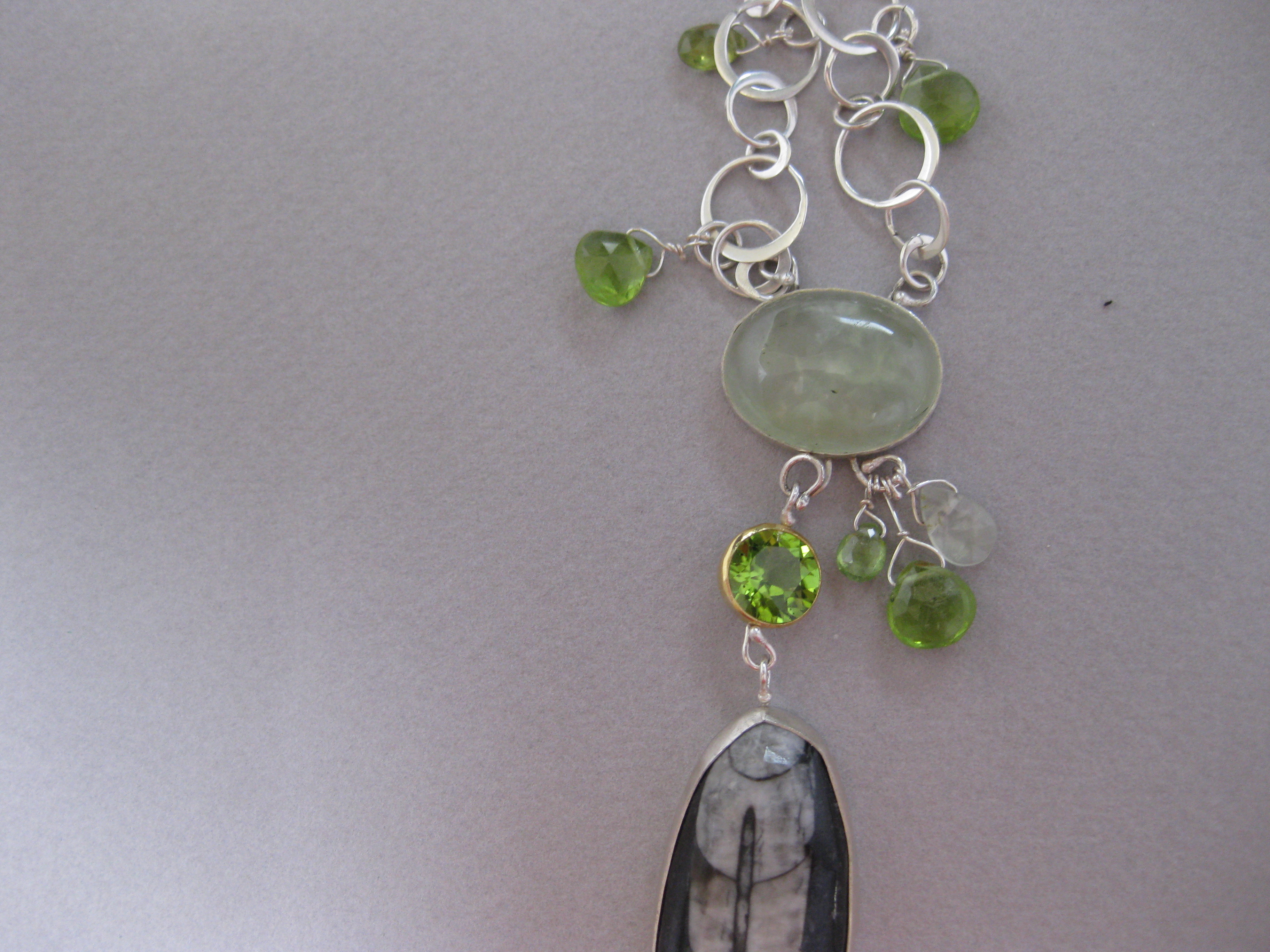 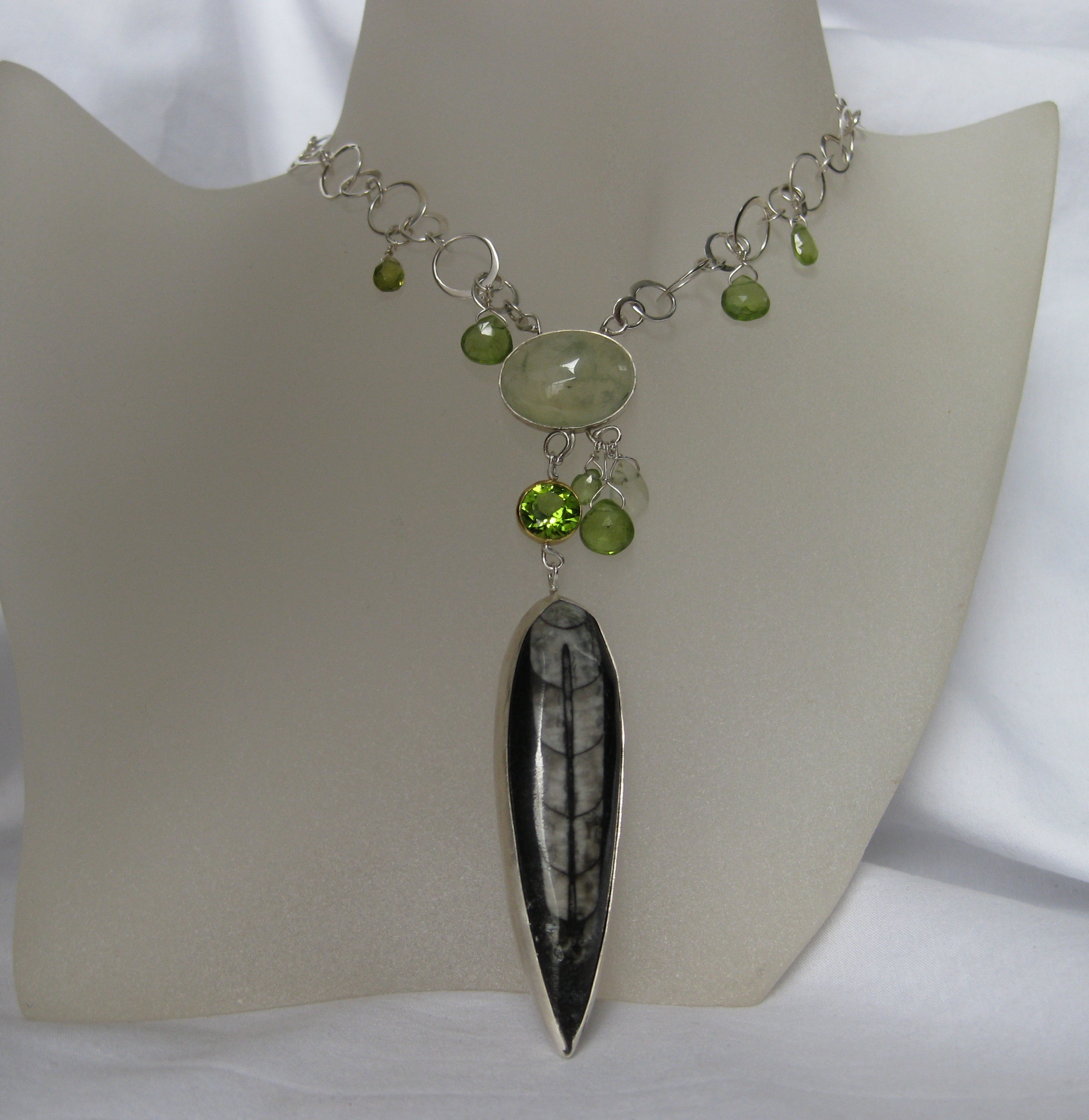 I’m so very grateful that the people that count (my friends, clients and various jewelry junkies) support my unusual ideas for making baubles. I love it when my wacky “magical” pieces are received not as “messy” but more, um, enchanting, interesting, unique. I want to pique your interest, tell a story.

The pieces on their way to Paris are wonderful magical talisman necklaces. Made with orthoceras, peridot, prehnite and set in gold and silver. Prehnite is the stone of remembered dreams and unconditional love. It connects the will and the heart to bring the highest good. One wears prehnite to trust ones intuition and recognize the truth. Let’s just say it’s been pretty good for me! 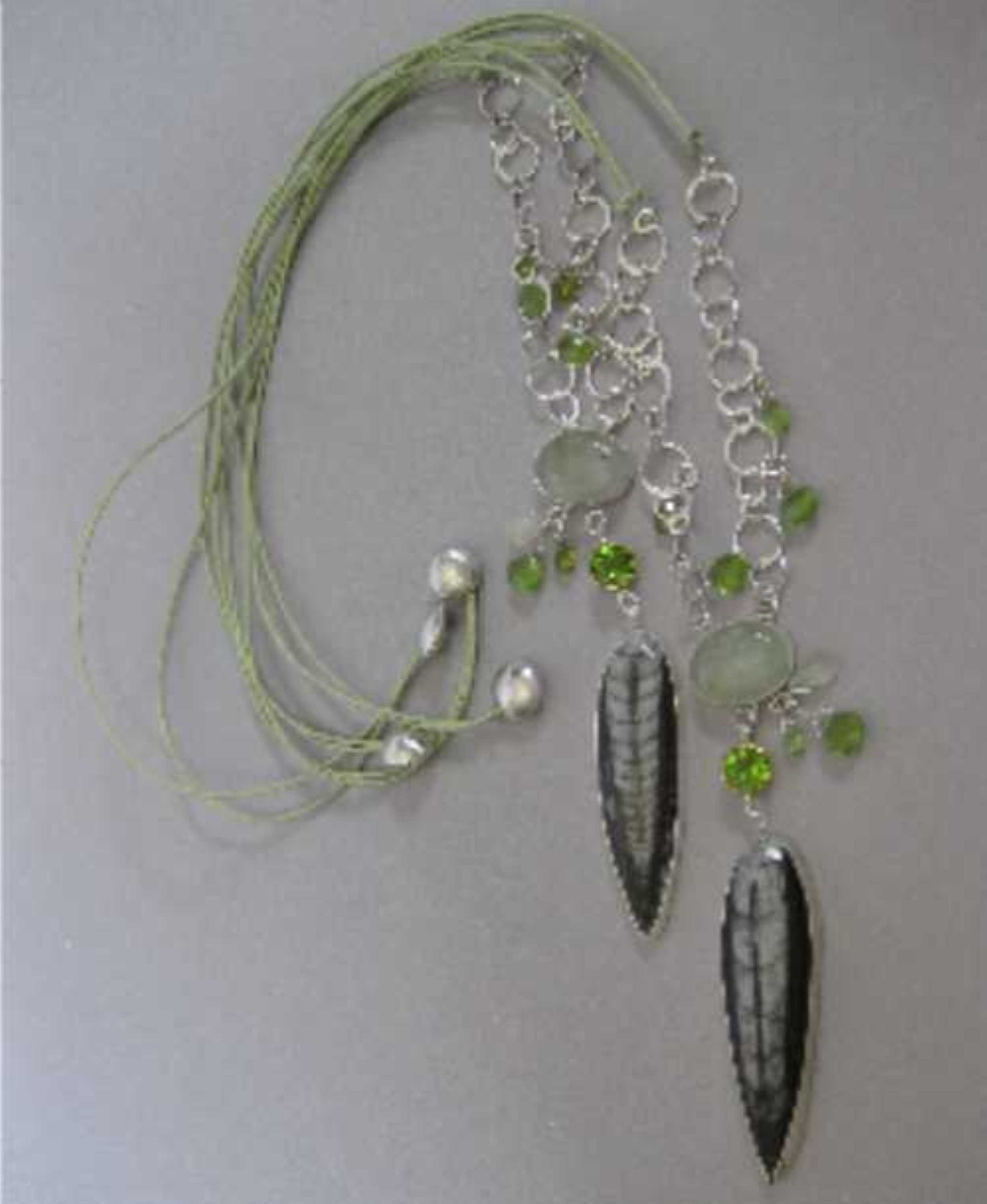 Peridot is  a protective stone that helps cleanse negative emotions like jealousy, or a wounded ego (did I need to work with this stuff or what?)

Although it’s a cliche to say, I’ll say it anyway, because it’s true: New Orleans is a very inspiring place for creating almost anything. It’s violent and magical with a fascinating deep dark underbelly. Achingly beautiful, crumbling, a chaotic combination filled with perfume. It’s fetid, charred and blackened, bloody and muddy, practically “messy”.

“Louisiana in September was like an obscene phone call from nature. The air–moist, sultry, secretive, and far from fresh–felt as if it were being exhaled into one’s face. Sometimes it even sounded like heavy breathing. Honeysuckle, swamp flowers, magnolia, and the mystery smell of the river scented the atmosphere, amplifying the intrusion of organic sleaze. It was aphrodisiac and repressive, soft and violent at the same time. In New Orleans, in the French Quarter, miles from the barking lungs of alligators, the air maintained this quality of breath, although here it acquired a tinge of metallic halitosis, due to fumes expelled by tourist buses, trucks delivering Dixie beer, and, on Decatur Street, a mass-transit motor coach named Desire.”