I Am What I Am

I have never really felt that I was an “artiste” per se, however, as I’ve “matured”, I think that creating things, whether it’s cake, a room or environment, a dress or an ottoman, the process is such an innate part of me, I’ve never considered it “creative” or “special”. I just look at stuff and start rearranging materials, patterns, flavors and colors. It’s hard for me to copy stuff. It drives my husband crazy when I show him a photograph of a room, and say “I wanna do something like this in the _________ room.” Then he says,”We can’t because of ___________”. Usually it’s something insignificant like a wall or plumbing. Then I say, “Duh. I meant the idea of this”. Our new scenario plays out like this: Before I hand him an image, I preface the act with this statement, “OK, I’m about to show you a picture of ________, I just like the idea of this. I’m going to change everything, but this is the idea, this is what I would like”. Now, he just rolls his eyes and watches me knock myself out.

After hearing “Oh, you’re SO creative” year after year. I have to admit it. I am what I am (and so are a tremendous amount of others). The inspiration I receive from artists and creative work is endless (hello google images!).

Years ago, (decades now) I was obsessed with Ted Muehling’s work (and I am still inspired by many of his pieces whether or not it’s jewelry).  His pieces evoke so much emotion in me, I wondered if I could ever make anything that would move me, or anyone else.

Recently I bought a book about jewelry (what else?) and in it is a quote from Mr. Muehling, “You can get a lot of power out of form that’s a centimeter long… That one-centimeter piece does two things. It’s a bit of punctuation and it might draw someone toward you.”

What an eloquent way to put it. How do you explain people being drawn in by jewelry? One of my friends recently tried on a ring of mine. She put it on and said she “loved it” but that her hands were too ugly to wear it. Um, not the point. “Pamster” I said, “are you kidding me? Have you seen MY hands? I wear stuff on my hands so that I can admire the beauty of the gem! It’s for ME.” 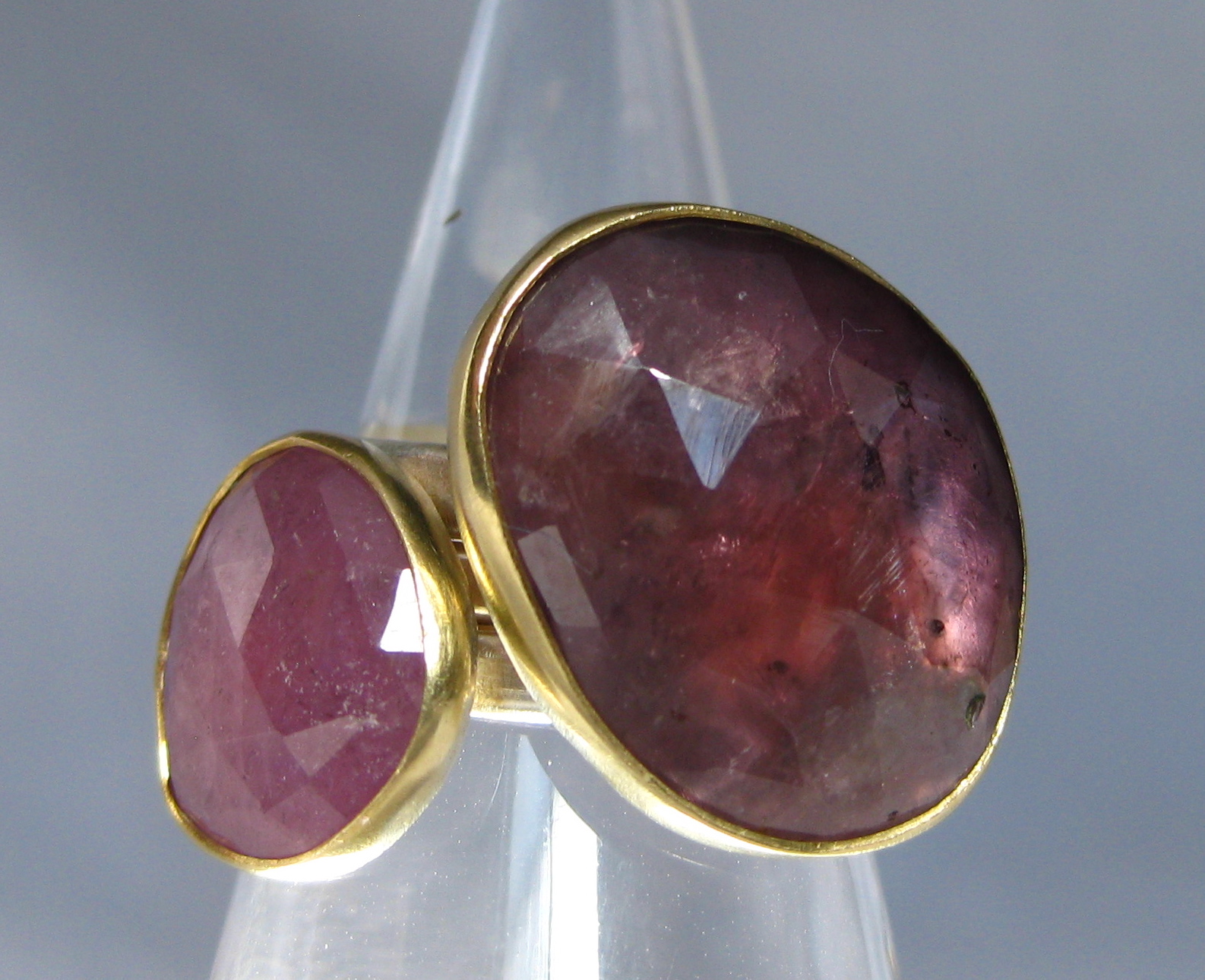 Pam’s ring is the one on the left. Now for some shameless self promotion: The one on the right is still available here: https://www.etsy.com/listing/98154176/rose-cut-pink-purple-ish-sapphire-ring

Here’s a Muehling piece that inspired me recently: 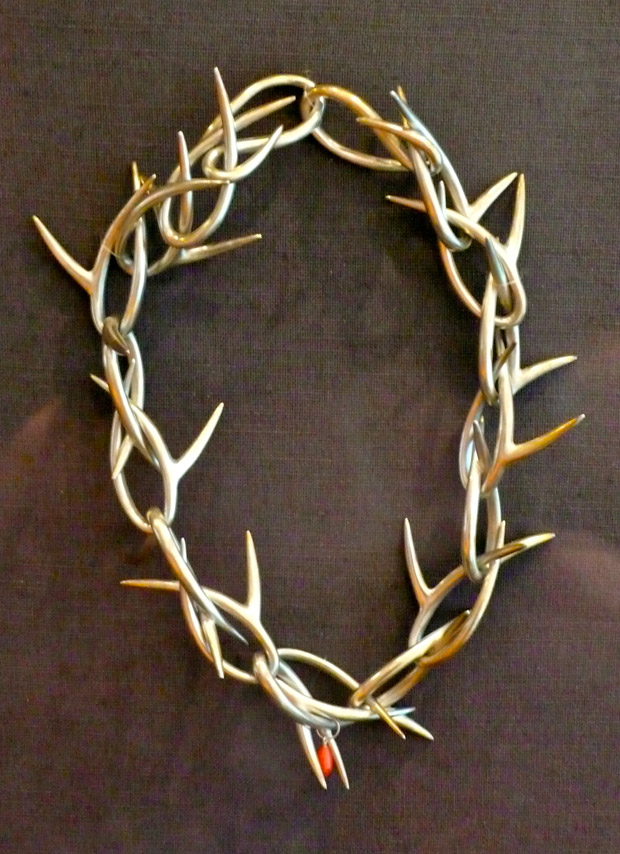 And here’s what I made after looking at this: 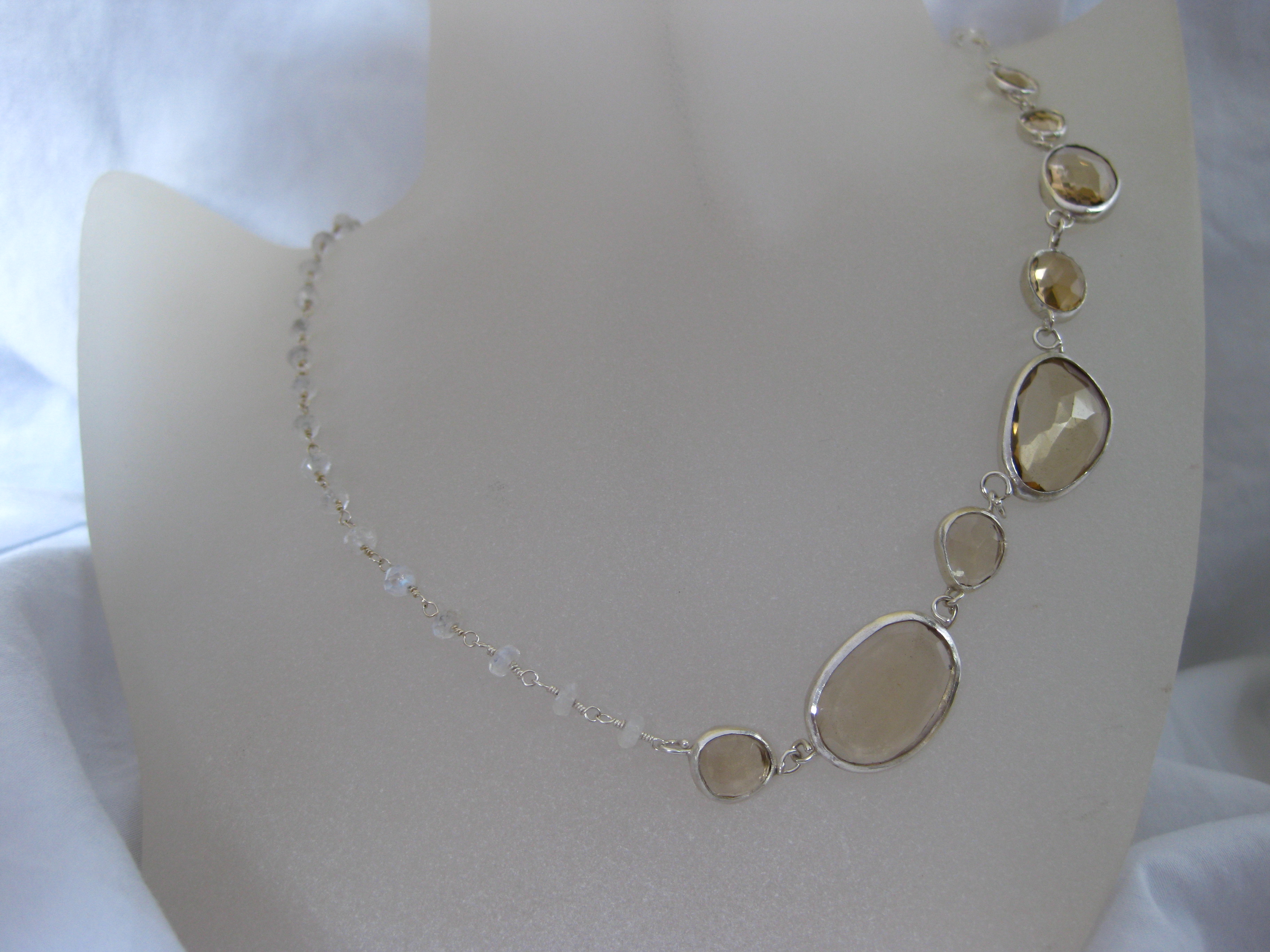 The inspiration is actually in the back of the piece: 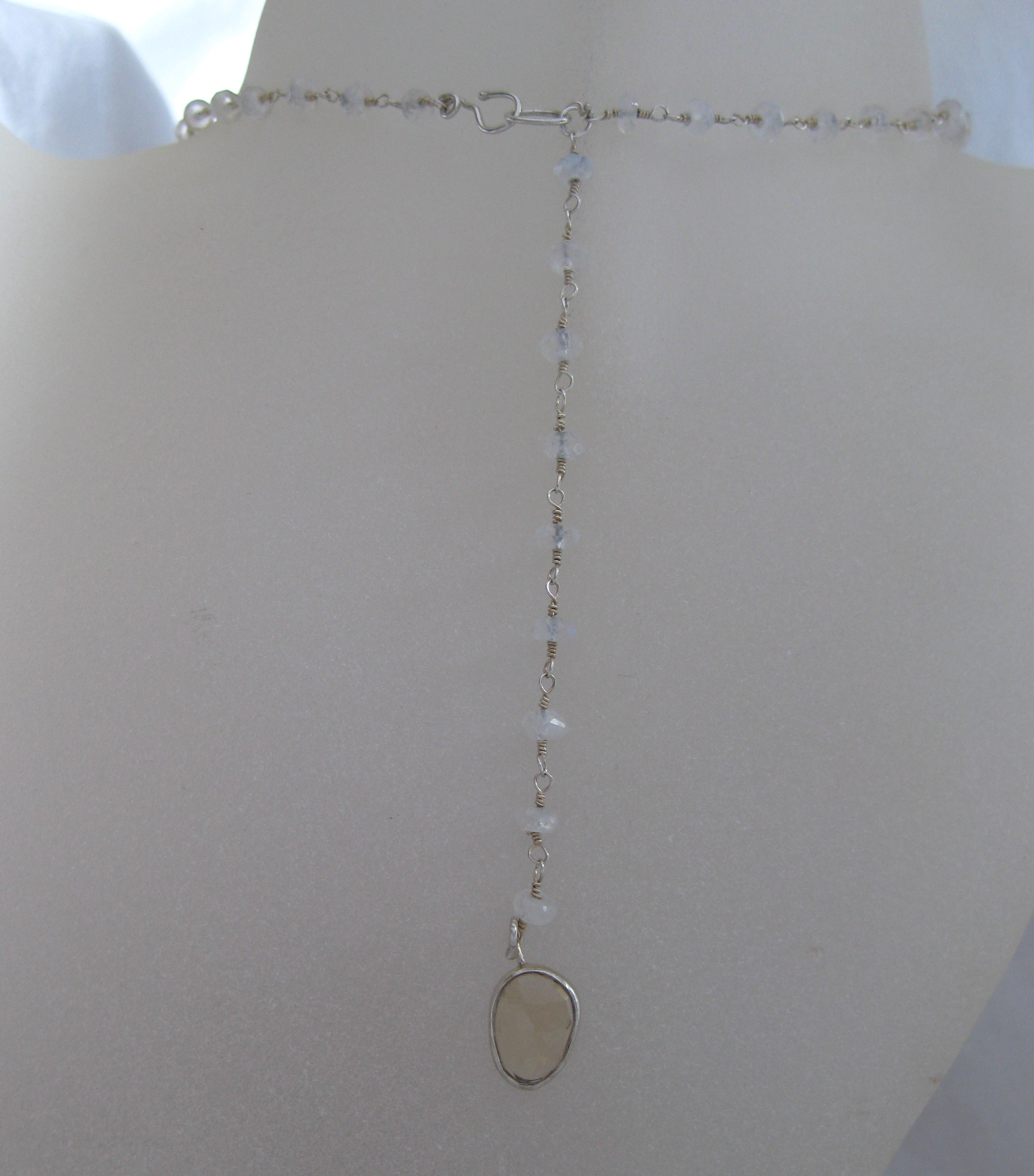 That little pop gave me the idea of a surprise, unexpected element. Unnecessary really, but after it’s there, you kind of want it. You’d miss it if it was taken away. It’s like Emily Post saying, “The woman who is chic is always a little different”.

(Next paragraph is a bit of a rant, but I can’t help myself).

The only issue I have is that little pop of color is coral. I am against using coral and ivory in anything I make. Although to be fair, I will say that (I believe) this piece was made before anyone realized how endangered it was. In the past, when I have received gifts of ivory or coral, I was appalled. Not long ago, I sold a strand of pre ban ivory beads, and in a way I felt guilty about it. That strand was given to me in 1984. I never wore it, and could not bring myself to take it apart to use in any of my work; even in the 80s when I was starving for cool components. So it sat in a box. Sure it was pre ban,but it always reminded me of a jeweler I knew in Montreal; he had 2 big elephant tusks hidden under his bed that he had somehow smuggled from Africa to use for inlay work. I was horrified. 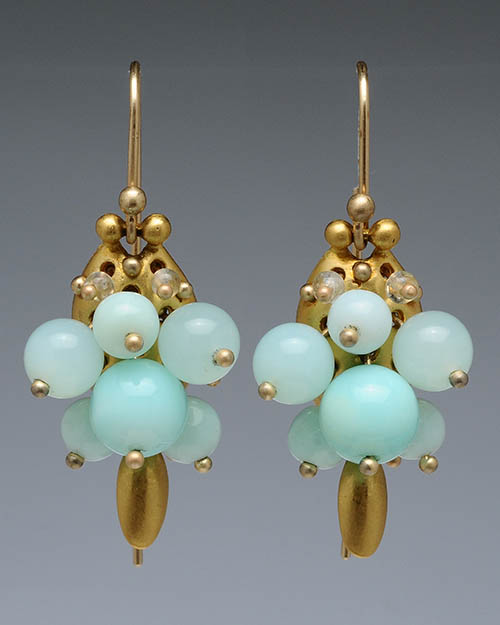 And here’s what I made: 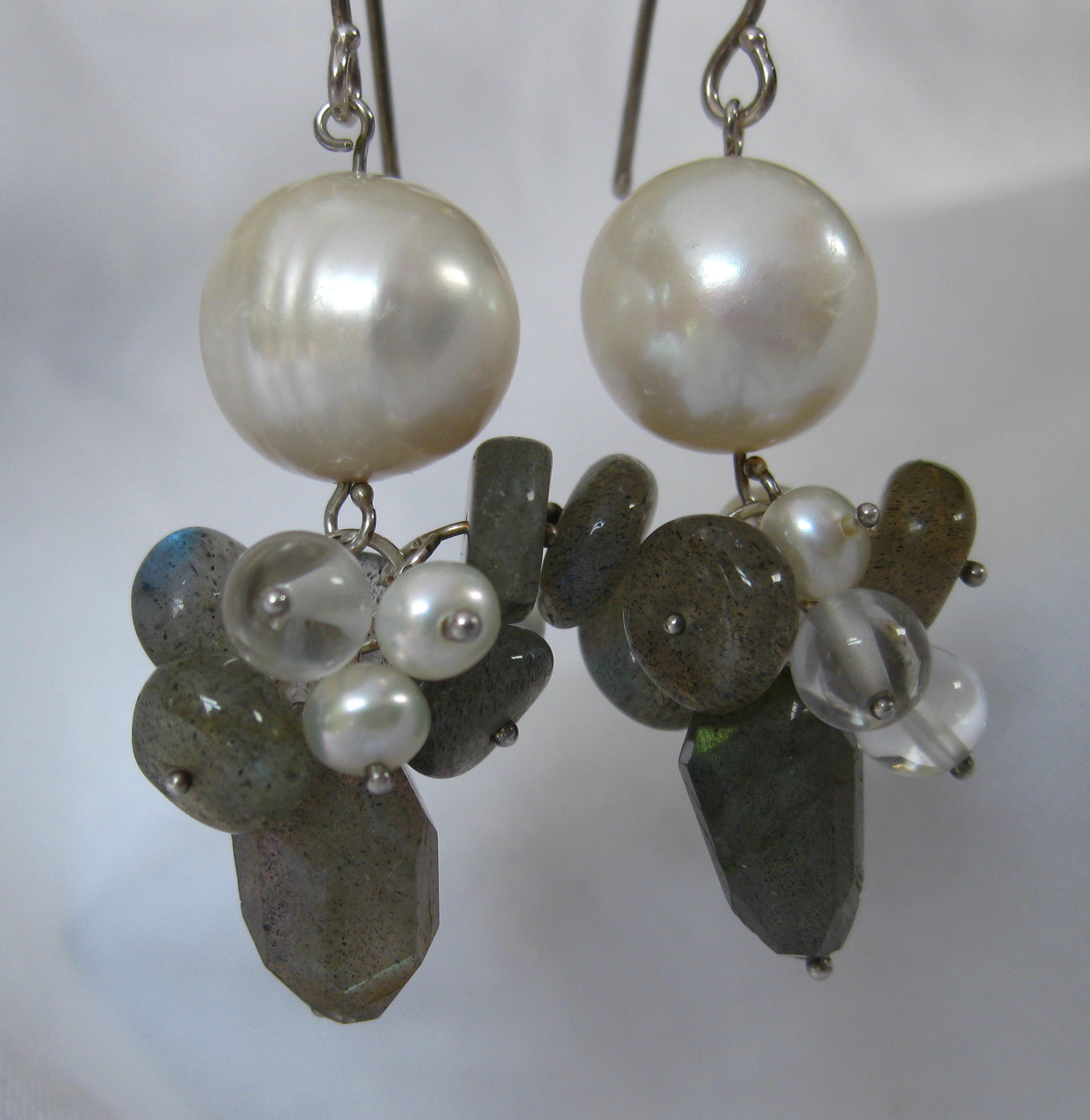 I know I know, his are way cooler. I just like the idea of them.