Like to booze it up, but hate the hangover? Amethyst jewelry to the rescue!

Back in the day, those wacky ancient Greeks and Romans would drink wine from amethyst cups to stave off drunkenness. The word amethyst comes from the Greek word “amethystos” which means “ not to be drunk” or a remedy against drunkenness. 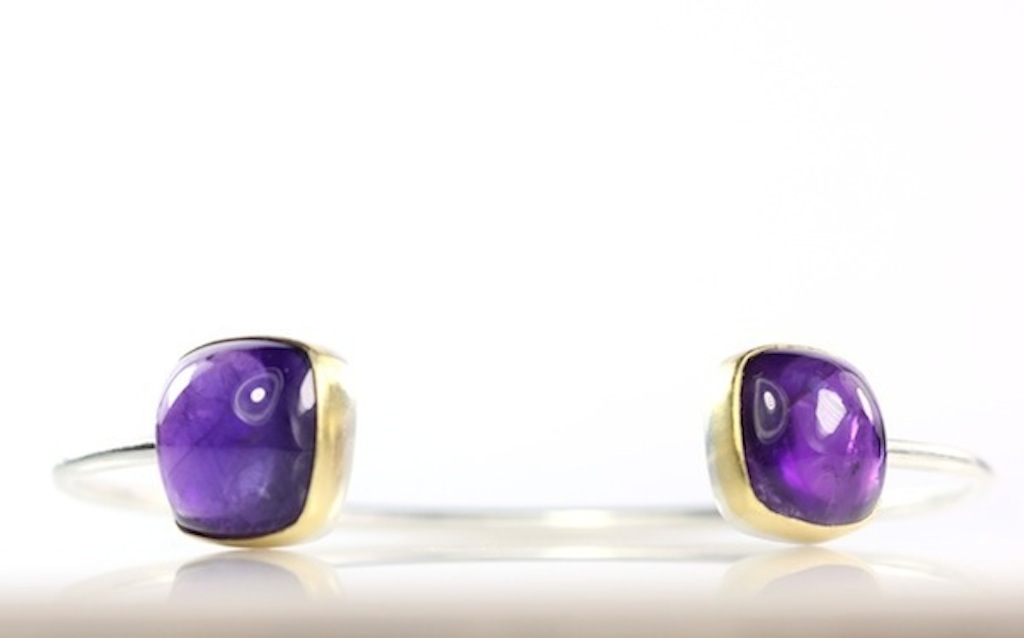 A symbol of purity and royalty since the beginning of time, amethyst jewelry has played an important role in politics and religion. Let’s start with the color purple itself: During ancient times, purple fabric was worn only by rulers and the upper classes. In those days, the only way to create purple fabric dye, was via a little snail like mollusk creature. It took thousands of mollusks to create one gram of purple dye. As expensive as gold, purple fabric became associated with the ruling class. Since the pharaohs and emperors at the time were considered to be gods or descendants of the gods, the color purple assumed a wise and spiritual dimension along with wealth, power and nobility. Later on in England, Elizabeth I made a bunch of annoying rules about who could eat what and when, and who could wear what, and when. One of those rules: only those with a noble status could wear purple. Ever hear the term “born to” (or of) the purple and wonder what it meant? Now you know!

Enough about the fabric, let’s get to the rocks! Amethyst jewelry was also associated with the ruling class. It was a hard to find rock, and very expensive. You can find amethyst in the British Crown Jewels, and both Cleopatra and Catherine the Great, Empress of Russia had some serious amethyst jewelry too. Cleo had an amethyst signet ring engraved with “an image of the Goddess Methe, or Drunkenness”. You can’t make this stuff up.

As luck would have it, Catherine the Great ruled over a land that produced (at the time) the world’s best amethysts! Siberian amethysts were rare and beautiful things, Catherine sent a multitude of peons to explore the Ural Mountains, and bring back those purply rocks. Many pieces of amethyst jewelry were created for her, and every now and then, some of her bling comes up for auction. Check out these babies. 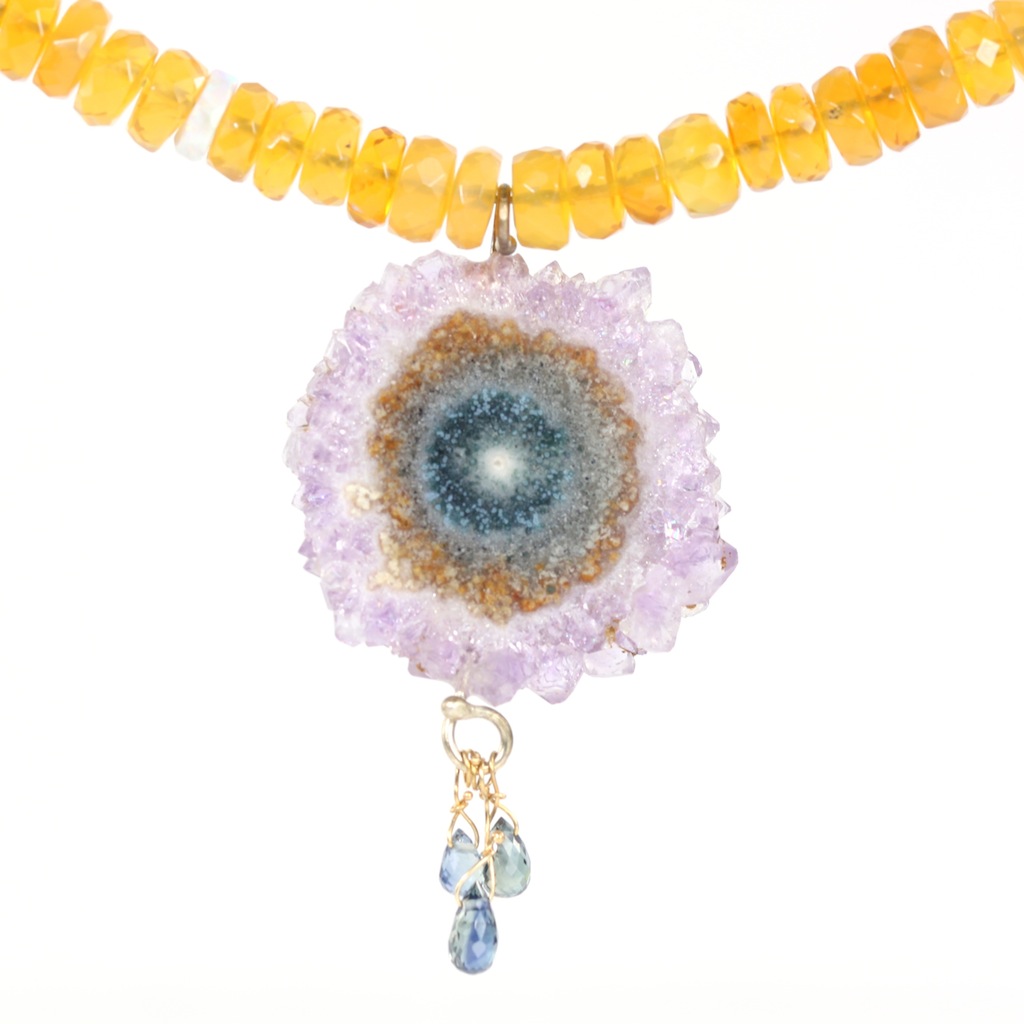 Amethyst is also known as the “stone of bishops”. Bishops’ rings in the Catholic Church traditionally include a large oval amethyst, symbolizing the fish (without the extended lines). In addition to keeping one sober, the amethyst was also used as a reminder for a Bishop not to become “drunk” with power. Amethyst was believed to quiet any kind of passion, and was thus used to create rosaries. Buddhist prayer beads are created with amethysts too; both religions encourage the celibacy thing. If you’re looking for a talisman to guard against drunkenness and seduction, amethyst jewelry is your secret weapon. The healing qualities of amethyst are said to help with addictions in general, and depression.

For centuries, the price of amethyst jewelry was as high or higher than its “cardinal” counterparts created with emeralds, sapphires, rubies and diamonds. Amethyst was one of the “cardinal five”, an old traditional term when these gemstones were classified as “precious”*. The designation of “precious” was determined by rarity, historical uses in religious rites and royal ceremonies (the whole purple equals rich, royal and spiritual doctrine kinda made amethyst a shoo in). The heady status of amethyst jewelry came crashing down in the early 19th century, when huge deposits were found in Brazil. Here’s my favorite part of the story: these deposits were discovered by immigrants from Idar-Oberstein, Germany. So what, you say? Well, Idar-Oberstein had been mining and cutting gems for hundreds, some say thousands, of years. It was a source of very fine amethyst (right up there with the Siberian stuff) along with agate deposits. In the early 1800s, the mines were depleted and mined out. Idar-Oberstein was in trouble. People left. Some people went to Brazil. A treasure trove of agate and amethyst was discovered, sent back to Germany and today, ta-da, Idar-Oberstein is one of the premier cutting edge, gem cutting cities in the world. Saved by its own people! 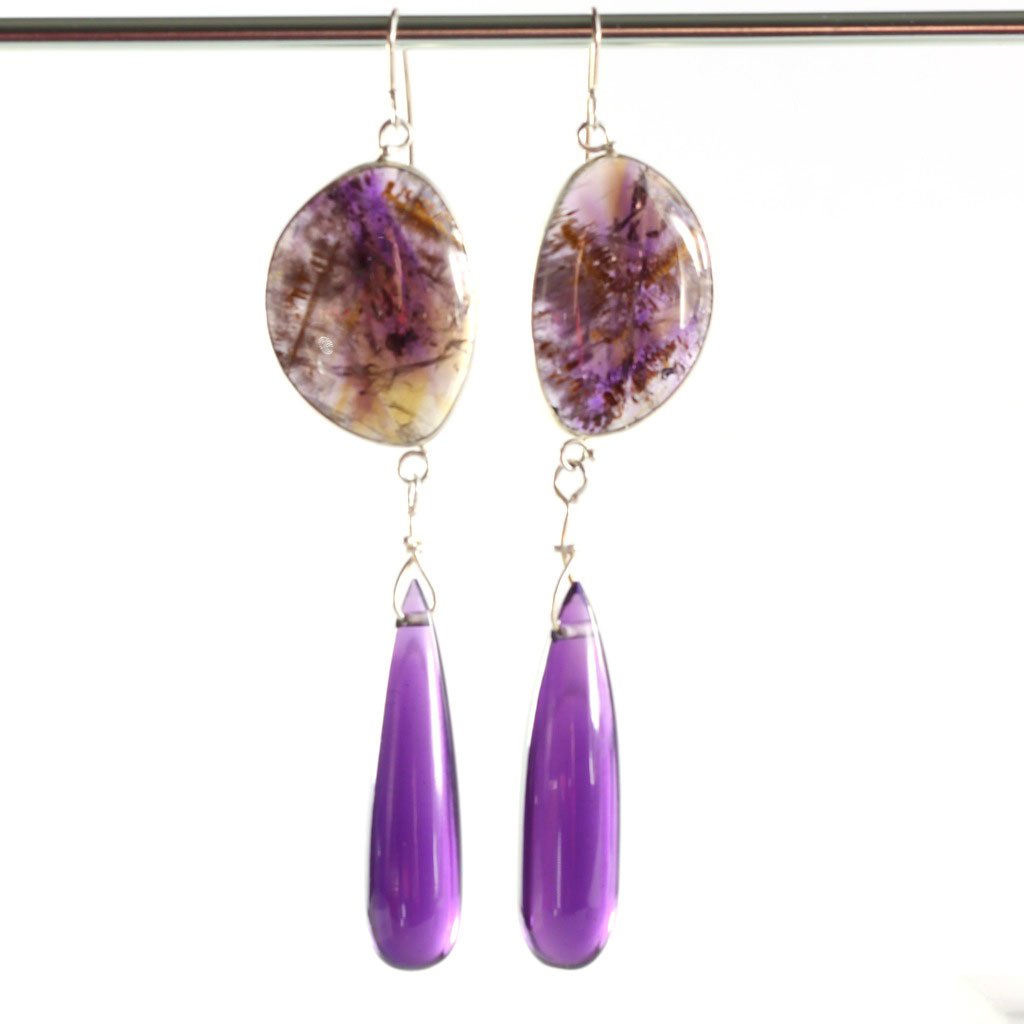 Stalactites are often rimmed with amethyst; these formations are also found in Brazil, and nearby Uruguay. Unique and special, often breathtaking, these specimens take on the powers of amethyst, and go deeper. They help with your hidden inner growth and the expansion of the higher self. You can find stalactite jewelry in the shop in the Otherworldly collection.

If it’s your lucky day, there may be some cacoxenite jewelry in the Her Purpleness collection. It is a combination of amethyst and six other minerals (sometimes called Super 7 or Melody’s stone). Basically amethyst with a lot of magical inclusions. Said to connect one to the universe, a stone of spiritual evolution or consciousness raising, providing a direct route to your soul.

Looking for a gift? Amethyst is the birthstone for the month of February, and is also an alternative to aquamarine for a Pisces baby. Amethyst jewelry is a traditional gift for a 6th anniversary, an alternate for a 17th anniversary,  and of course, Valentine’s Day. According to ancient lore, Saint Valentine wore an amethyst ring with Cupid (that pesky God of Desire, Attraction and Love that pierces your heart with an arrow) carved into the stone. Amethyst jewelry is available in the Her Purpleness collection. 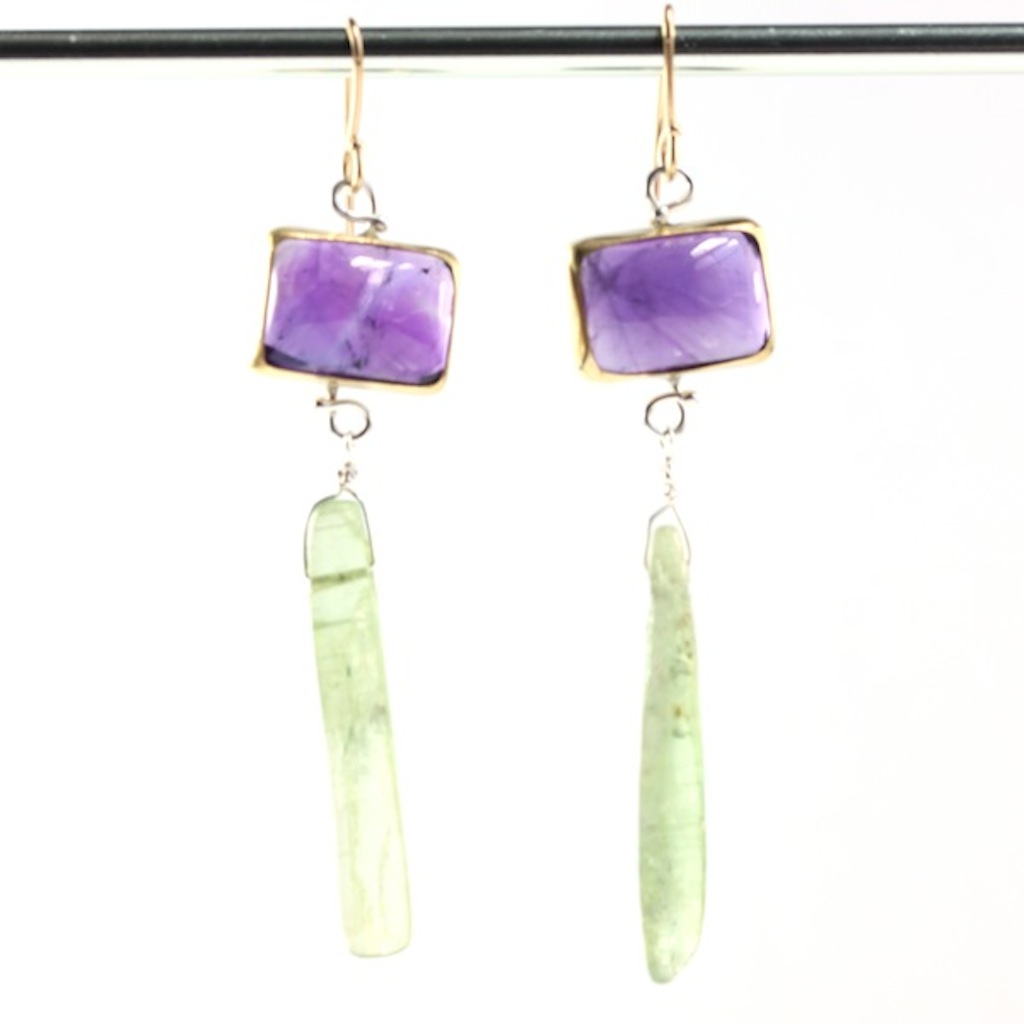 In conclusion: amethyst jewelry is affordable and beautiful, this purple rock has a fascinating history, and to this day is used to help combat addictions. It represents spiritual contentment and wisdom, brings peace, protection, and helps one live a centered life. Om.

*Generally speaking, the terms “precious” and “semi precious” are no longer used as lingo in the business of gems and jewelry. We consider ALL gemstones “precious”, some are just more expensive than others!